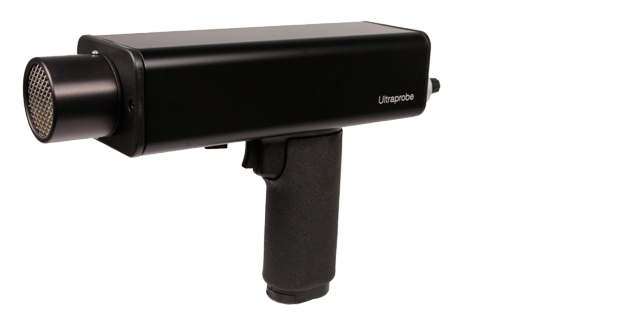 Fast, accurate, and designed for ease of use, it often takes no more than 15 minutes to become competent in ultrasonic testing using the Ultraprobe 2000.

The Ultraprobe 2000 also enables data reporting through three modes: through auditory channels (via a headset that has been specifically selected for heavy duty industrial use), through a uniquely designed bi-modal analog meter, and through the ability to interface with vibration analyzers, & sound recording devices via the heterodyned output.

For use in hazardous environments, the Ultraprobe 2000 is rated intrinsically safe. An ATEX model is also available.

The Ultraprobe 2000 can be adapted to test practically any problem in operating equipment with such features as:

Sensitive only to ultrasonic frequencies, the Ultraprobe 2000 will not respond to the low frequency noises often associated with most plant equipment. Therefore, the “gun” can be effectively utilized in extremely loud environments.

One Analog Instrument to Test Them All!

Looking for more information on the Ultraprobe 2000? Download a product guide or compare the UP 2000 to other ultrasonic instruments.
check out Complete Kit
check out Technical Specs
check out Accessories